A small, silver lining on the COVID-19 cloud has been reductions in emissions of air pollutants as a result of nationwide lockdowns and the closure of international borders. In early March, NASA reported dramatic reductions in concentrations of nitrogen dioxide over China. Nitrogen dioxide is formed from the combustion of fossil fuels and is a useful indicator of emissions from transport and industry. Available ambient air quality monitoring data in New Zealand suggests similar reductions are occurring here.

The same analysis carried out for particulate matter less than 10 micrometres in diameter (PM10) shows a 42% reduction in daily PM10 concentrations in Takapuna.

Of interest, the average reduction in daily concentrations of nitrogen dioxide and PM10 has been significantly smaller at the Penrose monitoring station in Auckland (average reductions of 43% in daily nitrogen dioxide and 29% in daily PM10). This is most likely due to the presence of industry near the Penrose monitoring station which has continued to operate during the lockdown period.

A more simplistic comparison of daily concentrations 20 days before with 20 days after lockdown suggests similar reductions have also occurred in other cities in New Zealand. For example, available data2 show an average reduction of 41% in Wellington (Figure 2), and 56% in Christchurch (Figure 3), in daily nitrogen dioxide concentrations for the 20 days of lockdown compared with the 20 days prior.

We know that significant reduction in ambient levels of PM10 will reduce adverse health effects in mortality and morbidity. It is tempting to estimate the health benefits likely to be realised from lockdown as offsets to the impacts of COVID-19. However, other unforeseen adverse effects of the extreme measures taken to address covid-19 will also be realised. As noted by Anna Hansell, Professor in Environmental Epidemiology at the University of Leicester, there will also be impacts from “financial hardship and stress (we know that poverty increases risk and severity of chronic diseases and also death rates), adverse impacts of isolation of the elderly (impacting on their health in various ways) and impact of restrictions on access to healthcare for non-COVID-19 diseases. The latter are likely to have knock-on effects on mortality for several years after the pandemic”.3

In other words, it’s complicated.

Postscript 1 May 2020: The (European) Centre for Research on Energy and Clean Air estimated 11,000 air pollution-related deaths have been avoided in Europe as a result of lockdowns, but also noted:

“Air pollution levels are plummeting as an unintended result of measures against the virus; this should not be seen as a ‘silver lining’, but it does show how normalised the massive death toll from air pollution has become, and points to what can be achieved if we shift to clean energy. When restrictions are fully lifted, European decision-makers can continue to implement policies to green electricity grids and transport systems in order to clear up our skies so we don’t return to heavy pollution.

As we are all anxious for life and business to return to normal, no one is looking forward to the return of fossil fuel pollution. It is vital for European decision-makers to prioritise clean air, clean energy and clean transport as a part of the plans for recovering from the crisis.

Auckland Council has published a report on long-term trends in Auckland’s air quality for the years 2006 – 2018.

The good news is that in most locations, both short-term and long-term PM10 and PM2.5 concentrations have decreased (Figure 1).

Su is Volunteer of the Year! 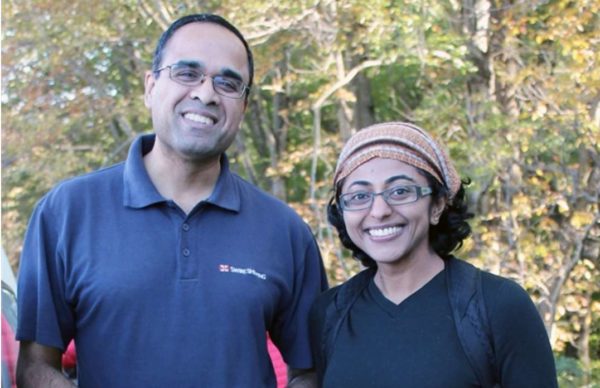 Roughly 1,400 individuals contributed 6,900 hours of volunteer time to community projects last year, according to the website. The Reston Association chose to recognise several individuals for their work in 2019 with the annual Reston Service Awards.

In 2019 Surekha contributed nearly 200 hours to the Reston Association and the Reston community. In addition to her work with Finance and Parks & Recreation, Surekha volunteers at many environmental events throughout the year. This work includes planting native trees and shrubs at Arbor Day and Earth Day events, tabling at the Nature Centre’s Spring Festival, inventorying wildlife at the Reston Association Bird Counts, and picking up litter at the Potomac River Watershed spring and fall clean ups. She supports several citizen science projects including monthly stream monitoring and weekly caterpillars count monitoring in spring and summer. She is an active member of the Environmental Advisory Committee, serving on the Litter Working Group and the Reston Annual State of the Environment Report Working Group. She is clearly committed to a more sustainable and beautiful Reston. She freely shares her time and talent during the week, weekends and evenings. She has even recruited her husband to volunteer (see photo).

Air pollution is linked to significantly higher rates of death in people with Covid-19, according to analysis.

The work shows that even a tiny, single-unit increase in particle pollution levels in the years before the pandemic is associated with a 15% increase in the death rate. The research, done in the US, calculates that slightly cleaner air in Manhattan in the past could have saved hundreds of lives.

Given the large differences in toxic air levels across countries, the research suggests people in polluted areas are far more likely to die from the coronavirus than those living in cleaner areas. The scientists said dirty air was already known to increase the risk of acute respiratory distress syndrome, which is extremely deadly and a cause of Covid-19-related deaths, as well as other respiratory and heart problems.

A separate report from scientists in Italy notes that the high death rates seen in the north of the country correlate with the highest levels of air pollution.

The scientists said their findings could be used to ensure that areas with high levels of air pollution take extra precautions to slow the spread of the virus and deploy extra resources to deal with the outbreak. Air pollution has already fallen because of widespread lockdowns, but the scientists said ensuring cleaner air in the future would help reduce Covid-19 deaths.

The study, by researchers at the Harvard TH Chan School of Public Health in Boston,analysed air pollution and Covid-19 deaths up to 4 April in 3,000 US counties, covering 98% of the population. “We found that an increase of only 1μg/m3 in PM2.5 [particles] is associated with a 15% increase in the Covid-19 death rate,” the team concluded.

A small increase in exposure to particle pollution over 15-20 years was already known to increase the risk of death from all causes, but the new work shows this increase is 20 times higher for Covid-19 deaths.

“The results are statistically significant and robust,” they said. The study took account of a range of factors, including poverty levels, smoking, obesity, and the number of Covid-19 tests and hospital beds available. They also assessed the effect of removing from the analysis both New York City, which has had many cases, and counties with fewer than 10 confirmed Covid-19 cases.

“Previous work showed that air pollution exposure dramatically increased the risk of death from [the] Sars [coronavirus] during the 2003 outbreak,” said Rachel Nethery, one of the Harvard team. “So we think our results here are consistent with those findings.”

Xiao Wu, a fellow team member, said: “This information can help us prepare by encouraging populations [with high pollution exposure] to take extra precautions and allocate extra resources to reduce the risk of poor outcomes from Covid-19. It is likely that Covid-19 will be a part of our lives for quite a long time, despite our hope for a vaccine or treatment. In light of this, we should consider additional measures to protect ourselves from pollution exposure to reduce the Covid-19 death toll.”

The authors said the results highlighted the need to keep enforcing existing air pollution regulations, and that failure to do so could potentially increase the Covid-19 death toll. They noted that the US Environmental Protection Agency suspended its enforcement of environmental laws on 26 March.

The study is being fast-tracked for publication in a major medical journal.

Prof JonathanGrigg, from Queen Mary University of London, said the study was methodologically sound and plausible, but had some limitations, for example, important factors such as smoking were not measured at the individual level.

“Clearly, we urgently need more studies, since locally generated particle pollution will bounce back once the lockdown is eased,” he said.

The US has the third highest death toll to date, after Italy and Spain. A second study focusing on Italy, published in the journal Environmental Pollution, said: “We conclude that the high level of pollution in northern Italy should be considered an additional co-factor of the high level of lethality recorded in that area.”

It noted that northern Italy was one of Europe’s most polluted areas and that the death rate reported up to 21 March in the northern Lombardy and Emilia-Romagna regions was about 12%, compared with 4.5% in the rest of Italy.

“It is well known that pollution impairs the first line of defence of upper airways, namely cilia, thus a subject living in an area with high levels of pollutant is more prone to develop chronic respiratory conditions and [is more vulnerable] to any infective agent,” it said.

Medical scientists warned in mid-March that air pollution exposure could make Covid-19 worse. Early research on Covid-19 had suggested that the weakened lungs of smokers and former smokers made them more susceptible to the virus.

While lockdowns have caused air pollution to fall dramatically, a comprehensive global review published in 2019 found that over long periods air pollution may be damaging every organ and virtually every cell in the human body.

The high court finding is a boost to attempts by campaigners to force the company to address the impact of its cars in producing lung-damaging pollutants at far higher levels than were legally permissible.

A group of about 91,000 claimants is taking Volkswagen to court in one of the biggest “class action” cases, or group litigation orders, yet to be heard in England and Wales. Although Volkswagen has been found guilty in the US, in Europe the carmaker has denied that it cheated tests.

The preliminary finding in the case on Monday, by Mr Justice Waksman, casts a fresh light on the activities of the carmaker, first revealed in the “dieselgate” scandal of 2015.

In his summary, the judge wrote: “[After considering the arguments made by Volkswagen] the upshot was that I found that the software function in the vehicles here did indeed amount to a prohibited ‘defeat device’… I also concluded that VW’s attempt to relitigate the issue here was an abuse of the process.”

He said: “A software function which enables a vehicle to pass the test because (artificially) it operates the vehicle in a way which is bound to pass the test and in which it does not operate on the road is a fundamental subversion of the test … it destroys the utility of the test.”