Changes in air quality during lockdown in Auckland

This paper presents a case study from Auckland, where traffic flows reduced by 60–80% as a result of a government-led initiative to contain the virus by limiting all transport to only essential services. Ambient pollutant concentrations of NO2, O3, BC, PM2.5, and PM10 are compared between the lockdown period and comparable periods in the historical air pollution record, while taking into account changes in the local meteorology.

This ‘natural experiment’ in source emission reductions had significant but non-linear impacts on air quality. While emission inventories and receptor modelling approaches confirm the dominance of traffic sources for NOx (86%), and BC (72%) across the city, observations suggest a consequent reduction in NO2 of only 34–57% and a reduction in BC of 55–75%. The observed reductions in PM2.5 (still likely to be dominated by traffic emissions), and PM10 (dominated by sea salt, traffic emissions to a lesser extent, and affected by seasonality) were found to be significantly less (8–17% for PM2.5 and 7–20% for PM10).

Report: Brake Dust Pollution ‘As Harmful To Health As Diesel’

New research finds brake dust has a “worrying” effect on health, with potentially “important policy implications” given it makes up a larger proportion of traffic pollution than exhaust fumes. When cars brake, they release metallic dust into the air. According to scientists behind the study, these particles stop vital immune cells from doing their job of protecting our lungs and lead to a greater risk of bacterial infections such as coughs, colds, pneumonia and bronchitis.

The UK-based research group was surprised to find that the brake dust had similar effects as diesel fumes, which typically receive more attention.

The study points out that exhaust pollution only makes up 7% of small particulate matter pollution (PM2.5). The rest comes from non-exhaust sources – namely from tires, clutches and brake pads. The latter is responsible for 20% of particulates.

Ian Mudway, who led the research at the MRC Centre for Environment and Health at King’s College, London, said that while it is “completely justified” that all eyes are on exhaust emissions, “we should not forget the importance of other components”.

A European transition to electric cars, which have less need to brake, “could be a slight benefit”, said Florent Grelier, an engineer at Brussels-based green group Transport & Environment. “Though of course, any car with a brake is going to be contributing.”

Mudway agreed, saying: “There is no such thing as a zero-emission vehicle, and as regulations to reduce exhaust emissions kick in, the contribution from these sources are likely to become more significant.”

According to Grelier, it is possible non-exhaust pollutants will be included in the post Euro-6 car emissions regulation, due in mid-2020. “That being said, the negotiations are still in very early stages,” he added.
He forecast that continued pressure from the EU’s Joint Research Centre and mounting scientific scrutiny will extend the conversation from exhausts to non-exhaust sources of air pollution.

Continued exposure to air pollution has been linked to a whole host of diseases from pulmonary ailments to brain-related ones in people of all ages. It follows then that reducing exposure to toxic air should have health benefits. And indeed, that is what the authors of a new study have found.

In fact, say the researchers from the Environmental Committee of the Forum of International Respiratory Societies (FIRS), the health benefits can be quite dramatic. “Reducing pollution at its source can have a rapid and substantial impact on health,” they explain in the paper published in the Annals of the American Thoracic Society.

They reached this conclusion after reviewing the results of various interventions worldwide that have served to reduce the extent of air pollution at its source. They then evaluated the outcomes and examined how long they took to manifest themselves. The results were eye-opening.

In Ireland, for instance, during the early stages of a ban on smoking the health benefits included a 13% drop in all-cause mortality, a 26% drop in the rate of ischemic heart disease, a 32% drop in the number of strokes, and a 38% drop in chronic obstructive pulmonary disease.  Not only that but non-smokers also greatly benefited from the ban on smoking. Perhaps that should come as no surprise as second hand smoking has been known to have adverse health effects for non smokers who are exposed to cigarette smoke.

Meanwhile, a 13-month-long closure of a steel mill in Utah, in the United States, led to a state of affairs whereby hospitalizations for pneumonia, pleurisy, bronchitis and asthma were halved. The daily mortality fell by 16% for every 100 μg/m3 PM10 (a pollutant) decrease. Pregnant women were less likely to have premature births while school absenteeism by children also decreased by 40%.

In Nigeria, where indoor cooking has long been a health hazard, especially for poor families, in families that reduced indoor air pollution at home by using clean cook stoves pregnant women gave birth to children with higher birthweights, experienced greater gestational age at delivery, and had less perinatal mortality, the researchers say.

“We knew there were benefits from pollution control, but the magnitude and relatively short time duration to accomplish them were impressive,” said Dean Schraufnagel, a physician who was the report’s lead author. “Our findings indicate almost immediate and substantial effects on health outcomes followed reduced exposure to air pollution. It’s critical that governments adopt and enforce WHO guidelines for air pollution immediately.”

Air pollution is much worse than we thought

Ditching fossil fuels would pay for itself through clean air alone. 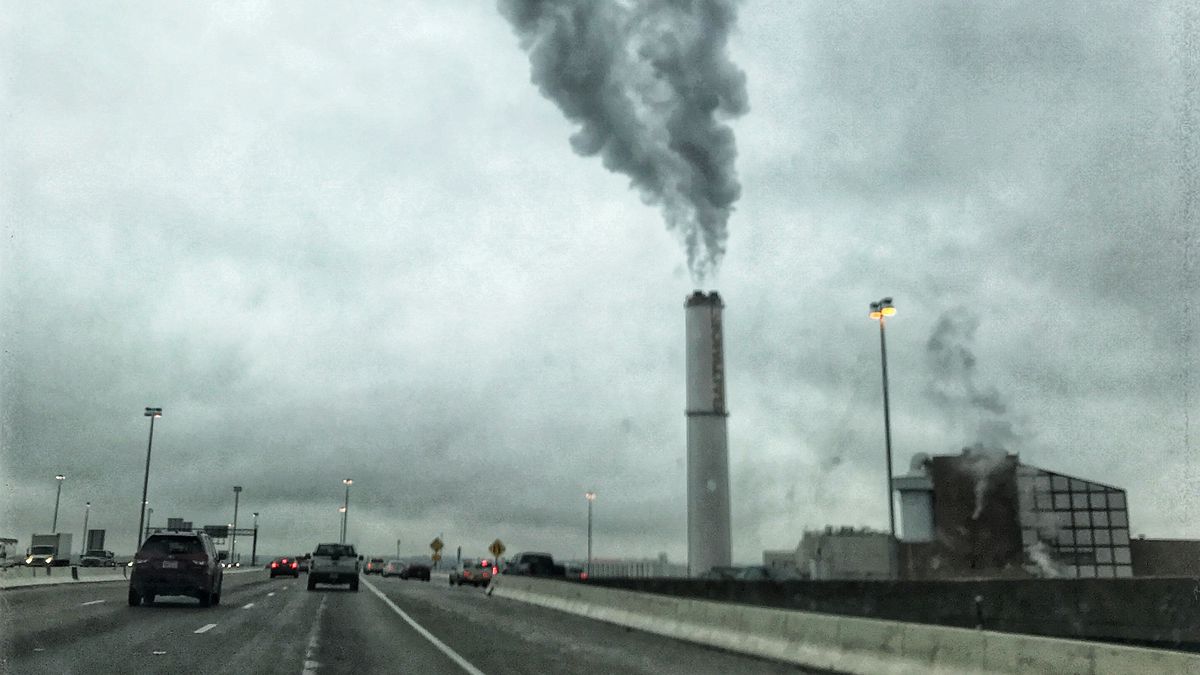 The evidence is now clear enough that it can be stated unequivocally: It would be worth freeing ourselves from fossil fuels even if global warming didn’t exist. Especially now that clean energy has gotten so cheap, the air quality benefits alone are enough to pay for the energy transition.

This conclusion has been reaffirmed by the latest air quality research, presented at a recent hearing of the House Committee on Oversight and Reform by Drew Shindell, Nicholas professor of earth science at Duke University (and a lead author on both recent IPCC reports).

Shindell’s testimony reveals that the effects of air pollution are roughly twice as bad as previously estimated.

“The air quality scientific community has hypothesized this for at least a decade, but research advances have let us quantify and confirm this notion, over and over,” says Rebecca Saari, an air quality expert who teaches in civil and environmental engineering at the University of Waterloo. “The air quality ‘co-benefits’ are generally so valuable that they exceed the cost of climate action, often many times over.”

If the numbers are shocking, it’s because the science has been developing rapidly. First, says Shindell, “there’s been a huge upsurge in work in developing countries, in particular China,” which has produced larger data sets and a wider, fuller picture of the real-world effects of exposure.

Second, where scientists used to focus almost exclusively on pollution effects for which there is an established and well-understood biological pathway, the recent production of enormous data sets (for instance, the entire population of more than 60 million Medicare patients) has allowed them to uncover new statistical correlations.

With giant data sets, “you can control for socioeconomic status, temperature, hypertension and other existing conditions,” and other variables, says Shindell. “You can convincingly demonstrate that correlation is in fact causal, because you can rule out essentially every other possibility.”

For example, scientists now know that exposure to smog (tiny, microscopic particulates) hurts prenatal and young brains. Even though they don’t yet fully understand the biological mechanism, they know it reduces impulse control and degrades academic performance. Similarly, they know it hurts the kidneys, the spleen, even the nervous system.

“The well-understood pathways, things like strokes, lower respiratory infections, and chronic obstructive pulmonary disease, only seem to capture about half the total,” Shindell says. “When you look at the [new] studies, you find that air pollution seems to affect almost every organ in the human body.”

“About twice as many people die in total as die just from the pathways we understand,” says Shindell. “We’ve been underestimating all along.”

While that may sound like a big jump, it is likely a lower bound. On both air pollution and climate change, the study omitted many effects that “are clearly present but cannot yet be reliably quantified.” The true numbers are almost certainly higher.

Climate change has often been framed as an intractable problem for international coordination, a matter of shared sacrifice, with every country incentivized to be a “free rider,” reaping the benefits without taking on any of the costs.

But the latest air pollution research, coupled with the plunging cost of clean energy, should render that dynamic moot.

It is true that climate change can only be averted with the entire world’s cooperation; if the US reduces its emissions to net zero but the other countries of the world (especially China and India) continue on their current trajectory, it will make almost no difference in temperature. The health benefits of avoided severe heat will not manifest.

However — and this is the crucial fact — the air quality benefits will manifest, no matter what the rest of the world does. Shindell’s team ran a version of their scenario in which the US came into compliance with a 2°C pathway but the rest of the world continued with current policies. “We found that US action alone would bring us more than two-thirds of the health benefits of worldwide action over the next 15 years,” Shindell testified, “with roughly half the total over the entire 50-year period analyzed.”

The air quality benefits arrive much sooner than the climate benefits. They are, at least for the next several decades, much larger. They can be secured without the cooperation of other countries. And, by generating an average of $700 billion a year in avoided health and labor costs, they will more than pay for the energy transition on their own. Climate change or no climate change, it’s worth ditching fossil fuels.

And if this is true in the US — which, after all, has comparatively clean air — it is true tenfold for countries like China and India, where air quality remains abysmal. A Lancet Commission study in 2017 found that in 2015, air pollution killed 1.81 million people in India and 1.58 million in China.

The extraordinary level of suffering humanity is currently experiencing from air pollution is not necessary for modernity; it could be reduced, at a cost well below the net social benefits, with clean energy technologies on hand.

If they are not necessary, then the millions of lives ended or degraded by fossil fuels every year are a choice. And when suffering on this scale, that is this brutally inequitable, becomes a choice, it enters the same ethical terrain as war, slavery, and genocide. The effects are more distributed over time and geography, as are the decision-making and the moral culpability, but the cumulative impact on human well-being — on our longevity, health, learning, and happiness — is comparable, and every bit as much worth fighting.