From a nondescript industrial building in Lower Hutt, a small company is charting new waters in the world of sustainable marine transport.

Inside the warehouse, the team from Wellington Electric Boat Building Company sand and prepare a 19 metre long hull that is fresh out of a mould while they await the arrival of its twin at Seaview Marina.

The catamaran, being built for the capital’s East by West Ferries, is on track to become what is believed to be the first fully-electric passenger ferry in the Southern Hemisphere.

Rated to carry 135 passengers, it is hoped the vessel will be cruising across Wellington Harbour with commuters and day trippers by mid-2020.

“I think it’s the future of boat building in New Zealand,” said Wellington Electric managing director Fraser Foote ,who has had his hand in everything from harbour ferries to America’s Cup racers during his decades in the boat building industry. 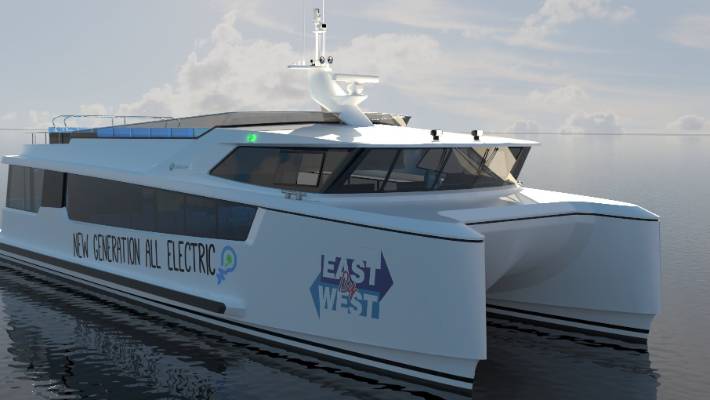 Electric transport technology is changing rapidly and it is logical for New Zealand to attach an industry to its largely sustainable energy supply, he said. “Wellington will have the turbine on the hill and electric ferries in the harbour.”

The growing market for electric vehicles worldwide showed there was an increasing appetite for sustainable transport and there was no reason the marine industry should be left out, he said.

Wanting a new vessel for his fleet East by West director Jeremy Ward said he approached Foote about building a new ferry after he discovered there were no companies in New Zealand or Australia building an electric craft that fit what his company needed. East by West is now a majority stakeholder in Wellington Electric and its first customer.

He was after a boat that was environmentally-friendly and that didn’t rely on non-renewable energy sources.

The electric motors to be used in the ferry generated no emissions. By comparison, East by West’s two other diesel ferries used about 250,000 litres of fuel a year between them.

Foote said an electric ferry the size of the one being produced for East by West cost in excess of $4 million, which was more than an equivalent-sized diesel boat.

Savings would be made over time through cheaper running costs. Electric motors required less maintenance than diesel ones and the cost of charging the batteries was up to 60 per cent cheaper than filling up with diesel.

The ferry would start each day on a full battery and would need a 15 minute charge to top it up between return trips.

Foote said the process of designing an electric boat was no different to designing a traditional diesel vessel, however because electric ferry building was still in its infancy, there there was a lot of research and development being done to get the new designs right.

One of the challenges was to combine the electric motors with a composite hull, which had different properties to a conventional steel hull, he said.

Inspiration has being taken from a larger Norwegian vessel Future of the Fjords. The boat, launched last year, is also a composite hulled catamaran.

With over a dozen expressions of interest Foote and Ward were confident an industry could be based around electric boat building in Lower Hutt. The company now employs nine full-time staff.